Up to the making of the present research, there was no clear answer as to who was responsible for the design and construction of José Clemente Orozco’s Workshop-Dormitory on López Cotilla St, in the city of Guadalajara, Jalisco. This Workshop-Dormitory is a point of convergence of influences that would mark the development of the country’s modern architecture, turning it into a milestone. This is why the documentation about the project, the circumstances under which it was conceived, and who was or were responsible for its design and construction takes such relevance.

For the present publication, four postures held by different sources and experts on the subject were identified: the first sustains the authorship of Rafael Urzúa, the second, of Luis Barragán, the third, of José Clemente Orozco, and, finally, the fourth favors a collaboration between Orozco and Barragán. The present text seeks to gather the aforementioned postures, as well as the arguments and evidence that might tip the balance towards one or another of these positions, in order to contribute towards the clarification of this debate.

In the first place, Rafael Urzúa’s participation in the project was backed up by a single one of the reviewed sources: the Historic and Biographic Encyclopedia of the University of Guadalajara, which states that the engineer participated in the design and construction of the House1.

In the second place, Luis Barragán is also pointed as the author of the López Cotilla Workshop-Dormitory, especially by experts on modern architecture, and those focused on the study and conservation of his work. It is worth noting that this is the most widespread and accepted perspective. Below, there is a brief list of some of the most relevant sources that back up the architect’s authorship.

– Raúl Rispa mentions the House for José Clemente Orozco in Barragán, The Complete Works. He presents the year 1934 as a possible date for Barragán to have carried out the floorplans for the building, without elaborating on the project’s execution. He explains the formal aspects of the façade as a reference to the close parallelisms in the work of the artist and the architect2. Similarly, he refers that it was the same architect who drew the floorplans for another residence (the Home-and-Studio of Ignacio Mariscal St) for Orozco in Mexico City.

– Louise Noelle mentions the House while describing the last stage of Luis Barragán in Guadalajara:

Three houses built on the grounds of the former prison of Escobedo (…) account for the aesthetic transformation, which prolongs into the House of José Clemente Orozco; the simplicity of this dwelling shows the painter’s proverbial lack of ostentation and strengthens the bonds of friendship that began in the iron city.3

She dates the house in 1934, before Barragán’s departure to Mexico City. She also mentions Orozco´s Home-and-Studio on Ignacio Mariscal St, Mexico City, as Barragán’s work.4

– Dr. Ignacio Gómez Arriola, at the conference given at the University of Colima in 2005, includes the Home-and-Studio of José Clemente Orozco amongst the works carried out during Luis Barragan’s functionalist stage.5

– Mónica del Arenal mentions Luis Barragán as the author of the House in Guadalajara: Builders, Dandies and Cyclists, locating it in Barragan’s modern architecture stage and dating it between 1934 and 19356. Proyecto la Ronda: Conoce y pasea por tu ciudad, of Recorridos Culturales Mónica del Arenal, created a catalogue of properties and designed interpretative routes. The cataloged properties are identified with bronze plaques, with the author, architectural style, and original name of the building. Said project reiterates the posture of Barragan being the House’s author, and dates the project in 19347. 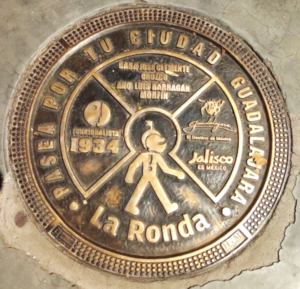 – Daniel Garza Usabiaga lists the House of José Clemente Orozco amongst the projects that Barragán carried out upon returning to Guadalajara after his second visit to Europe, and he dates it in 1934. The author emphasizes the rupture with Barragán’s previous works that the house represents, and the relationship of the façade’s cubic volume with Orozco’s graphic work8, which will be discussed further on.

– Juan Palomar Verea, a Tapatío architect, points out Barragán as the author of the House, dating it in 19359, and identifies it as a demonstration of the evolution of the architect’s oeuvre towards abstraction10. He reasserts this posture in the datasheet made for the Guía Arquitectónica de la Zona Metropolitana de Guadalajara11.

– Miquel Adriá mentions the Home-and-Studio of López Cotilla St as one of the works that Barragán carried out during the five years he practiced in his hometown and also points out the Home-and-Studio at Ignacio Mariscal St as the architect’s work12. He describes the former as a turning point between the contextualist architecture of the former years, and the modernist and Corbusian [architecture] he carried out these years in Mexico City and dates it between 1937 and 193813. Adriá highlights the importance of the transition spaces and the relationship between houses and gardens in the architect’s work of this stage, as well as the instruments that control the entrance of light towards the interior14.

– In their blog, the Guadalajara-based magazine URBES names Barragán as the author of the project for the Home-and-Studio, and describes is as a link between two geniuses. It dates the project in 193515.

– The Barragan Foundation website counts with a visitor’s guide to Luis Barragan’s works in Mexico City, Monterrey, and Guadalajara. It includes the Orozco House in their map of Guadalajara and sets the date of 193716.16.

– Amongst the reviewed literature that affirms Barragán’s authorship of the Home-and-Studio, the datasheet made by Mónica del Arenal for the Guía de Arquitectura de Guadalajara, alludes to the fact that the property is attributed to Barragán, or, in other words, his authorship is presumed without concrete proof or documentation to sustain or disproof the claim. Said source dates the property in 193417.

– The Barragán Guide explains that, even though no documentation supports it, the Workshop-Dormitory allows a glimpse of the work, or at least, the influence, of Luis Barragán:

The sequence of different planes between the street-level entranceway and the interior […] shows the project of the Orozco House to have been largely influenced by Barragán, even if no documentation permitting certain attribution has yet been found.18

In the third place, a brief list with some of the sources that sustain that Orozco himself designed and built his Workshop-Dormitory on López Cotilla St. will be presented. With one exception, these are documentary sources focusing on the artist’s life and works.

– From the interview of Orozco with María Palomino for Hoy magazine, which took place at the painter’s studio on Ignacio Mariscal St. in Mexico City, barely a day before his passing away (September 7, 1949), the reporter remembers what the artist told her, and which seemingly confirms his authorship:

– Mrs. Margarita Valladares, the painter’s wife, narrates the following in the memoirs dictated to her granddaughter, Tatiana Herrera Orozco:

Your grandfather built four studios. (…) They all have in common the sobriety of their architectural lines, since they were designed by him with great simplicity, both in their exterior as in their interior, without ornaments of any kind. He painted them white outside and inside. (…) All four have a great picture window facing north, except for the one at López Cotilla, which faces south. He preferred the northern light, he explained to me it was the most even, and also blueish, and not yellowish as the southern light.20

– Antonio Riggen, in his book Luis Barragán: Mexico’s Modern Master, 1902-1988, makes a brief note clarifying that there is no proof of Luis Barragán having designed the López Cotilla Workshop-Dormitory, and that said design was actually carried out by Orozco21.

Finally, a fourth posture sustains that the Home-and-Studio wasn’t the work of a single one of the mentioned characters, but rather, is a collaborative work between Orozco and Barragán.

– Dr. Claudia Rueda manifests that Barragán aided Orozco with the Workshop-Dormitory and apparently collaborated with him by signing the building permit. She holds that the house was built in 1938 22.22.

– Emilia Terragni allows the possibility of variable degrees of possible collaboration between the architect and the painter, ranging from a work of Barragan’s authorship in close collaboration with Orozco, to a project fully designed by Orozco, with Barragán simply acting as a consultant and signatory.23.

– Van den Bergh, when detailing on the friendship that Orozco and Barragán held, mentions the existence of sources that attribute the co-design of the home-and-studios of López Cotilla St and Ignacio Mariscal St to Barragán, without obtaining its documentation. The author attributes the building to Orozco.24

– The artwork label of the Workshop-Dormitory, included in the exposition Luis Barragán en Jalisco, organized by the International Council on Monuments and Sites (ICOMOS), Jalisco Committee, and the General Direction of Cultural Heritage of the Secretary of Culture of the State of Jalisco, indicates Luis Barragán as the author of the project, with José Clemente Orozco´s collaboration.25.

– The Secretary of Culture of the State of Jalisco, in the update of the inventory of cultural heritage datasheet, issued on February 5, 2019, states Luis Barragán Morfín in co-authorship with José Clemente Orozco and indicates that the property dates from years 1937 and 1938.2626

In order to contribute towards the resolution of the controversy on the authorship of the Workshop-Dormitory, a series of line of research were followed to develop the present text. The documentary research consisted of the review of literature, containing both journalistic and bibliographic material, visits to archives and government offices, the Rafael Urzúa Archive, and as well as a review of online content. The second line of this research consisted of interviews with José Clemente Orozco’s direct family members, architects with expertise on the subject, and artists knowledgeable on Orozco’s work.